A day to celebrate Heroes – April 14 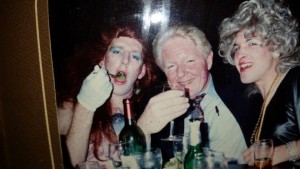 Today is Bob Carey’s birthday. He would have been 73 today if …he hadn’t left us on Valentines Day last year, 2015. I am celebrating him today:who is was and continues to be in my life and in my heart. We were married for a short time, only 10 years from 1981-1991, but even 25 years later the connection remains strong as when we first met. He was a terrific father and stepdad of five children and several granddaughters. What I notice today is that as a family we are all stronger because of him. He was the glue that kept us connected even after years of divorce. The His, Mine and Ours of family is one family today and I know that would make him so very happy, and also proud. Bob was so very proud of his kids. Whether is was appreciating his son’s restaurant management skills, his daughters’ business and academic achievements, or coaching and cheering at softball games, giving advice on a job or relationship challenge, or being the perfect POPS to his granddaughter, he was always so very proud of his kids, and he told them so in ways they could recognize and really FEEL.

So the HERO thing today is all about BOB. Bob was an Aries and always thinking BIG, outside the box that most of us were playing is. Bob had a company rightly named Urban Centre Developments where he was all about creating Urban environments and bringing people together. Embarcadero Center in SF, Marina Square in Singapore, Harvard Square in Cambridge are a few of his projects. He was a party kind of guy. Someone who would take charge, make it happen and make sure everyone had a good time. Bigger than life sometimes, that was Little Bobby Carey, a name I affectionately called the boy from Brooklyn who ended up working to revitalize Rockefeller Center!

Bob had been talking about this idea he had to write a book about Everyday Heroes. He was so inspired by people who went beyond, who supported the underdog, who started ingenious businesses, or those in sports who overcame obstacles. He had started some research on these unsung heroes when he got the melanoma diagnosis in 2013. He never wrote that book, but when I think about him today I know that he is one of those unsung heroes. He was a creative and dynamic businessman who didn’t take NO for an answer when he thought he was right. You wanted Bob Carey on your side of any negotiations! He was a generous and giving family man and always stayed in touch with extended family on birthdays and anniversaries. He was a great friend and left way too soon. An unsung hero in our midst he was and still is. I know the kids are remembering him today and celebrating with a pint in an Irish pub, or by asking What Would Bob Do? to resolve a business decision. I brought our daughter flowers today just because that is something her Dad would do. Caring and loving til the end. He was our hero and we miss him.